Fatty amines are nitrogen derivatives of fatty acids, olefins, or alcohols prepared from natural sources, fats and oils, or petrochemical raw materials. Fatty amines can be obtained by hydrogenation of fatty nitriles, which are produced by the reaction between triglycerides, or fatty acids, or fatty esters and ammonia with elimination of two molecules of water at high temperature in the presence of dehydrating catalyst. Fatty amines are cationic surface-active compounds which strongly adhere to surfaces by either physical or chemical bonding.

The amines are classified as primary, secondary, or tertiary depending on the number of hydrogen atoms of an ammonia molecule replaced by fatty alkyl or methyl groups.

Primary amines arise when one of three hydrogen atoms in ammonia is replaced by an alkyl or aromatic group, and the general formula is RNH2.

The primary amine can be changed into secondary amine by reacting with epoxy resin and then converts into tertiary amine by the same route.

Secondary fatty amines have two organic substituents bound to the nitrogen together with one hydrogen.

The secondary fatty amines are rarely used directly and they mainly used to produce cationic and zwitterionic surfactant derivants. 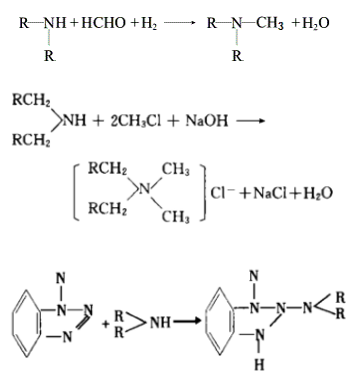 Alfa Chemistry offers a variety of fatty amines for customers to choose from.