Glycerides, more correctly known as acylglycerols, are esters formed from glycerol and fatty acids that are very hydrophobic. They are by long-established custom subdivided into triglycerides, 1,2- or 1,3-diglycerides, and 1- or 2-monoglycerides, according to the number and position of acyl groups (not, as one might suppose, the number of glycerol residues). 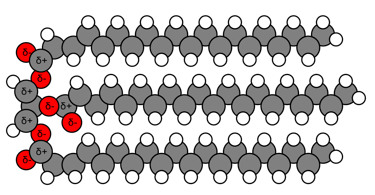 Monoglycerides are primarily used as surfactants, usually in the form of emulsifiers. Monoglycerides are commonly added to commercial food products in small quantities, which helps to prevent mixtures of oils and water from separating.

Diglycerides, also called diacylglycerols, are a class of glycerides consisting of two fatty acid chains covalently bonded to a glycerol molecule through ester linkages. Two possible forms exist: 1,2-diacylglycerols and 1,3-diacylglycerols. Diglycerides are a minor component of many seed oils and are normally present at about 1-6%; or in the case of cottonseed oil as much as 10%. Industrial production is primarily achieved by a glycerolysis reaction between triglycerides and glycerol.

Diglycerides can act as surfactants and are commonly used as emulsifiers in processed foods, and they also can act as a second messenger in biochemical signaling.

A triglyceride is an ester derived from glycerol and three fatty acids. Triglycerides are the main constituents of body fat in humans and other vertebrates, as well as vegetable fat. They are also present in the blood to enable the bidirectional transference of adipose fat and blood glucose from the liver, and are a major component of human skin oils.

In the human body, high levels of triglycerides in the bloodstream have been linked to atherosclerosis, heart disease and stroke. While triglycerides are also split into their components via transesterification during the manufacture of biodiesel. The resulting fatty acid esters can be used as fuel in diesel engines.

Alfa Chemistry offers a variety of glycerides for customers to choose from which are classified into saturated and unsaturated types.